I have also been doing quite a bit to my website; have reorganised my customer Testimonials page and have added quite a bit of information to my hair keepsake page. In doing so I have realised that I do not actually display any where the presentation of my custom jewellery when I send it to the customer.

So I thought I would show you a couple of examples of my custom jewellery. This photo shows a typical hair keepsake pendant mounted within its jewellery box. The customer didn’t want to wear this pendant but they were to be given out as gifts to family and friends. The pendant was mounted within the jewellery box on a short piece of ribbon, to be kept as a keepsake rather than worn as an item of jewellery. 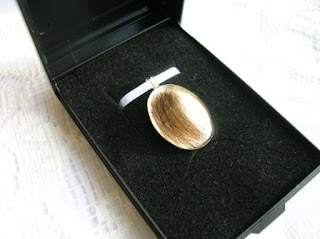 This photo shows an example of the engraving that I do for the back of my sterling silver keepsake pendants. I can accommodate most engraving requirements including small messages, names, dates, and in this case a heart symbol. I think the most words that have been engraved onto one of my keepsake pendants was seven or eight words which isn’t bad for the size of the pendant. The engraving on the keepsake is a nice touch as it makes the jewellery even more personal to its owner. 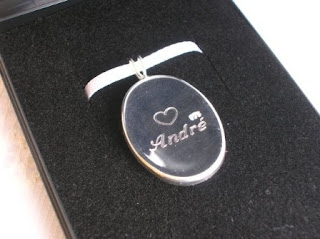 You may remember a recent blog post of mine where I mentioned my name on rice jewellery that starred in a movie. Well another exciting thing happened to me this week, I was contacted by a producer at BBC Radio 4 who is putting together a documentary about hair jewellery and wanted me to help! I will update you with the details if/when it goes ahead at a later date!
Posted by Shpangle at 14:19