Made in Leicestershire Directory

This is my second publication of the year; I have made it into the Made in Leicestershire printed directory for 2010 that was published this week. The directory showcases fifty original artists and crafters from around Leicestershire and Rutland, and I am very excited to be featured in it. I spent a long time preparing my artist statement for it and selecting an appropriate photograph that it is fantastic now seeing it all in print! 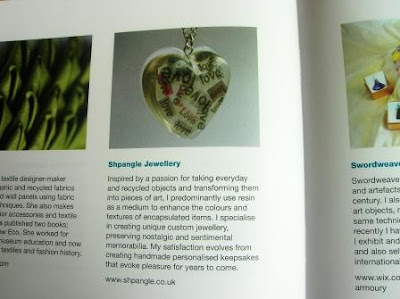 I feel really honoured to be amongst some extremely talented artists and crafters in this directory. If I was to pick any (which is extremely difficult because they are all very talented), the ones that caught my eye were:

Beautiful, sculpted and tactile handknitted and felted bags by Created and Felted...don't you just want to give them a squeeze!

Ceramic figurines by Create to Destroy...just look at the texture of movement captured in these figurines.

And of course my Handmade Custom Jewellery by Shpangle!
Posted by Shpangle at 13:44 5 comments:

Yes my eyes may be sore, yes reading a book will not be the same again but I think what I made my wife recently was well worth it!

This is a necklace personalised with her name written on a single grain of rice. 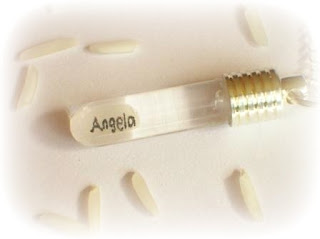 With a steady hand and lots and lots of practice and patience I have managed to master the art of rice writing. Recognised as a symbol of good luck, prosperity and fertility (but we will ignore the last one!), writing on a single grain of rice dates back to ancient times and originates from Ancient Turkey and India.

Currently I can comfortably write 16 characters on a single grain of rice (eight characters per side), which covers most names and messages. However I am slowly aiming for the record of two hundred characters, made by a man in Turkey a long time ago and written with a strand of hair!

If you would like to know more about name on rice writing and its history and symbolism, please visit my website page Personalised Name Jewellery.
Posted by Shpangle at 12:06 19 comments:

Yes you have read it correctly! A customer asked me last week if I could make him some onion cufflinks, well in his own words he asked “I know this may seem like a strange request but is it possible for you make cuff-links with an onion ring inside”.

I managed to persuade him that using real onions was probably a bad idea. I am not sure if you could get an onion small enough, maybe spring onions I suppose. But since objects need to be completely free from moisture before being placed in resin, I wouldn’t like to say how an onion ring would look when it has been completely dried! 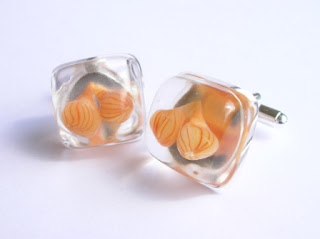 So I suggested using vegetable dolls house miniatures and that is exactly what I used. These lovely detailed and handmade miniature onions have been embedded into clear resin cufflinks, and he is delighted with his new onion cufflinks! I never did ask what the significance of having onion jewellery and I probably will never find out, so I will leave that one to your imagination!

To read about his reaction to his new onion cufflinks please visit my website Testimonials page.
Posted by Shpangle at 12:35 6 comments:

Anyway, because I try to take every opportunity to promote my jewellery I thought it would be a good idea to make something for him. Using the heart theme I produced a resin keyring and phone charm, with the school logo embedded within a pink resin heart. 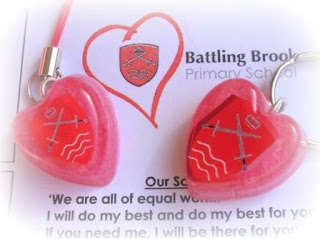 The Headteacher now has the keyring and he gave the phone-charm to the deputy-head. They are both over-the-moon with them!

Well, we have to take every opportunity that we can to promote handmade goods and I wasn’t going to let that one go by. It has already got me thinking about producing promotional jewellery for clubs, charities, companies and other organisations, so a big ‘Thank you’ goes to the Headteacher for giving me a new inspiration.
Posted by Shpangle at 13:59 4 comments:

My jewellery is in a Fashion Magazine!

I was contacted a few weeks ago from by a UK fashion magazine which focuses on alternative fashion and culture. They were putting together their latest addition and wanted to feature some of my unique cufflinks within their wedding themed product spread!

And it came out this week so as it is my first time ‘in print’ I immediately bought a copy, and here I am (top left in the feature). 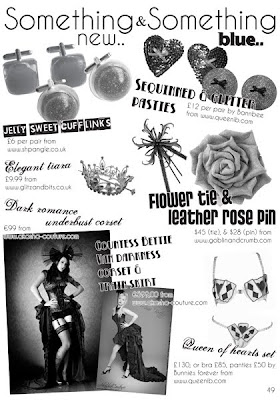 My cufflinks are part of their ‘Something new’ product spread where they were highlighting a few pieces that would make excellent accessories for an alternative wedding.

I am chuffed to bits, mainly because I was approached by them, it is fantastic free publicity and little old me is in a Fashion Magazine WOW!
Posted by Shpangle at 09:55 12 comments:

I have just had the most bizarre custom jewellery request; someone wants some onion rings putting into a pair of cufflinks! I will blog about that at a later date, but first I completed these custom jewellery items this week so I thought I would show them off!

The first is for a resin pendant containing horse hair. The lady wanted the pendant coloured green (because it is her favourite colour). I experimented with both making the whole pendant a translucent green and also just giving the pendant a green backing. This was her favourite (with the green backing). It may look like the hair is scattered within the pendant, however it was built up in 3 layers over several days with the hair carefully placed within each layer. 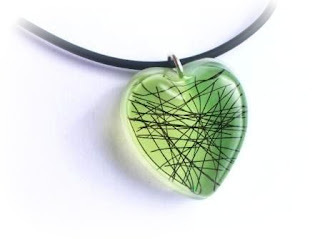 The second is for a lock of hair from a lady who has recently got engaged and her fiancé wanted a lock of her hair to carry as a keyring. This was set within resin on a sterling silver bezel and I engraved it on the back with her message to him. I also made her a resin heart phone charm (because I had some left-over hair), which she has subsequently given to her mum. 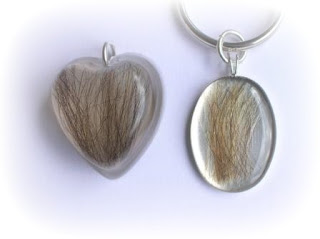 And the third pendant is this one containing rabbit fur. This was my first opportunity in setting rabbit fur into jewellery and it was wonderful to do. The fur was gorgeous to work with and the resin pendant really did show off the black and white coloured fur. 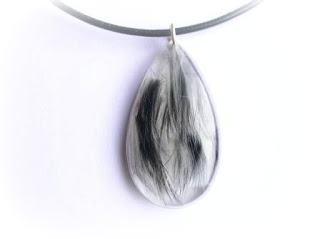 Stonehenge and other Megalithic Art

A very strange thing happened to me this week! I was browsing a craft forum that I am a member of and came across a thread started by the extremely talented Rita of OOAK Fairy Fae Sculpture. As well as making her one of a kind hand sculpted Dolls and Fairies she also finds the time to paint!

The picture that caught eye was this that she had painted of a misty Stonehenge. I just knew that we had to have it as Stonehenge means so much to Angela and me. And now we have the painting, so many thanks go to Rita as it is gorgeous and brings back so many memories. 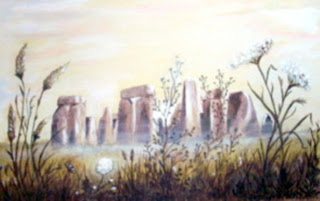 Angela and I have both had a fascination with stone circles and megalithic monuments. We have travelled all over the country to see them and have even started to write a book about our experiences.

I even proposed to Angela in the middle of Stonehenge. I had secretly arranged special access to the stones and then arranged with Angela to go on a camping trip to Stonehenge. We woke at sunrise in the morning and entered the stone circle. It was very surreal as we have only previously viewed the stones from the other side of the visitor fence. It was a fantastic way to propose to Angela, and the memories of that day will be treasured forever.

The day I proposed to Angela at Stonehenge 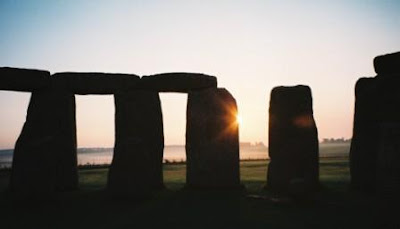 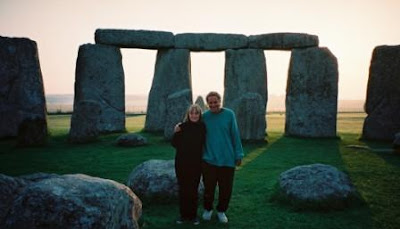 Our next visit to Stonehenge was as part of our Honeymoon. The start of our honeymoon coincided with the summer solstice so we spent our honeymoon night with thousands of other people amongst the stones and stars. The sunrise through the stones the next day was breathtaking and the whole atmosphere was filled with celebration and happiness.

Sunrise at the Summer Solstice during our Honeymoon 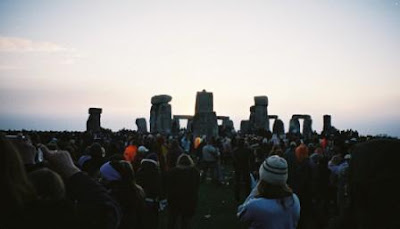 I strongly believe in fate and also believe in the magic of Stonehenge. My parents took me to Stonehenge as a child and I will never forget the forces I felt radiating from the stones. I suppose Children are meant to pick-up on that sort of thing and whatever it was, it affected me.

The magic of Stonehenge was certainly working this week and must be calling us back for another much needed visit.
Posted by Shpangle at 14:08 4 comments: