It has been a hectic but extremely enjoyable week at Shpangle Jewellery. I woke up yesterday to find my website stats had gone through the roof, and after a little investigation found my lock of hair jewellery had been featured in the Daily Mail newspaper! Not only had I been featured in the online article titled The art of pregnancy: The weird and wonderful ways modern mothers are celebrating having a baby I was also in the paper copy (page22) if anybody still has it. As a result I spent yesterday and much of today answering phone calls and emails from potential customers of my keepsake jewellery. 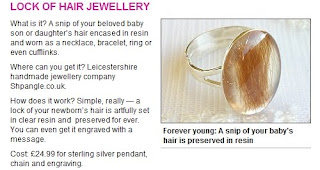 And it doesn’t stop at the Daily Mail; it appears that several newspapers around Europe also ran a similar article with references back to my website so I have been a busy boy! The other news is that I was asked last week to make a name on rice necklace for the lovely TV presenter Jasmine Harman who amongst other things presents the Channel 4 program ‘A place in the sun – Home or Away’. 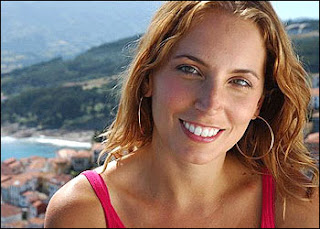 The necklace was to be a gift for Mother’s Day and contained two grains of rice both with names on. While I was at it I made a name on rice pendant for her as well! It is a single grain of rice with her name and the glass vial has a daisy fused on the outside; I included a little glitter as well and here it is: 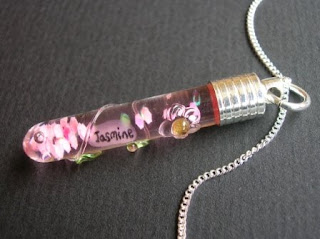 So far this year Shpangle Jewellery has been in a Movie, had a Radio Interview and now a newspaper article...what is next, a TV program maybe? Well, guess what...one phone call I had yesterday was from Scottish Television wanting to show my jewellery on TV, so watch this space!