Getting creative on the beach – Sea glass

My apologies for having not blogged for a couple of weeks but I have been braving the arctic conditions on holiday! This year we decided to have a change from our usual visit to Cornwall and visited the East Coast, staying at a friend’s caravan in Chapel St. Leonards (near to Skegness which is a traditional holiday resort for us Hinckley folk). Whilst we did have a few days of rain we made the most of it and probably visited a few places that otherwise we may not have discovered, including a working windmill, a lovely donkey sanctuary and a seal sanctuary.

We also had some very nice sunny days (we later found out that we were very lucky). So I was subjected to the annual ‘bury dad with sand on the beach ritual’ which gave our children great amusement. 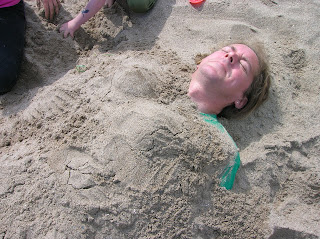 We also spent many hours creating sand sculptures on the beach and these were all carefully planned and designed by Braden, our five year old boy. This is one is based upon his design for a rocket powered boat. It took hours to make and then lasted five minutes once we allowed the children to board her! 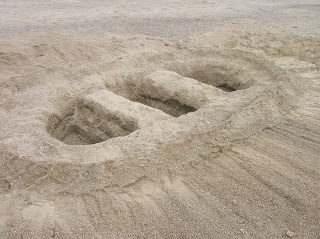 My jewellery making is never far from my mind even on holiday and this year I managed to increase my collection of sea glass somewhat; this collection was the result of a few happy hours spent walking up and down the beach. 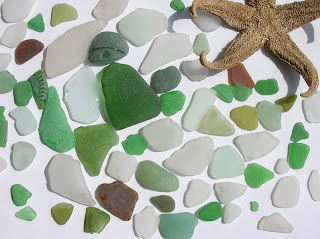 For those of you are new to sea glass, it is formed from broken glass bottles and other glassware being tumbled and polished by the forces of the sea. The result is beautiful pieces of polished glass that have developed unique colours and textures. I am not quite sure what I am going to make this collection of sea glass into yet; perhaps a few pieces of sea glass jewellery but I quite like the idea of making a mosaic. If you have any suggestions for what I could make with this sea glass please let me know.

I hope everybody has a great holiday this year and for those lucky enough to be going away use the time well to replenish your creativity and gain inspiration from the different surroundings.

Thank you gift for my Son’s teacher

My children break up from school today for the long six weeks of the summer holidays; so please forgive me if I am a little quiet for the next few weeks as I will be busy entertaining them! The children in Leicestershire seem to break up a week earlier than most of the country. This has its advantages as this first week seems to be relatively quiet when taking them out to visit places and most of the prices haven’t been inflated just yet.

It dawned on me the other day that I didn’t have a thank you gift for my son’s teacher. It has been his first ‘proper’ year at school this year and she has incredibly helpful in helping him to settle in. He will also be having a different teacher next year so I thought it was only right I made her a little gift.

Having a talent of writing names on grains of rice can be quite handy when it comes to last minute personalised gifts such as these. A quick phone-call to the school (to find out his teacher’s Christian name) and then a few hours later of staring at grains of rice and I produced this. 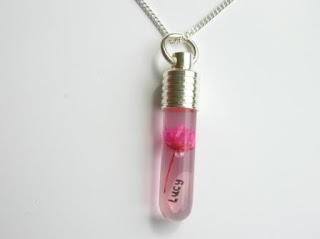 It is his teacher’s name written onto a single grain of rice and I have also included a little pink flower and a slight tint of pink to the magnifying oil. A lovely handmade gift for a teacher to receive don’t you think and it also makes a change to the many bunches of flowers and boxes of chocolates that she is also likely to receive!

If you would like to read more about my rice writing, and how it is made please visit my name on rice jewellery website page.

Thought I would show off a bracelet that I made this last week as I am quite proud of it. I was asked to make a keepsake bracelet for the owner of six dogs so that she could carry a small piece of her pets’ fur with her wherever she goes.

Initially she was happy with the suggestion of having a charm bracelet with six small silver charms. Each charm would hold a small piece of her dog’s fur and would hang from the bracelet chain. But then I had a moment of inspiration and suggested making this bracelet. 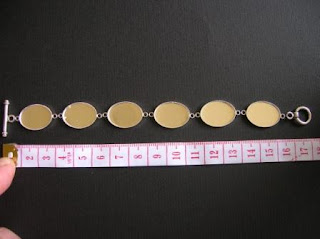 The lovely thing about this bracelet is that I could size it exactly with the addition of jump rings. Also each charm is interconnected rather than hanging to form the bracelet. The whole bracelet would be sterling silver including the toggle clasp. The lady was happy to go with my suggestion and I was equally happy to have been given the opportunity to make something different. 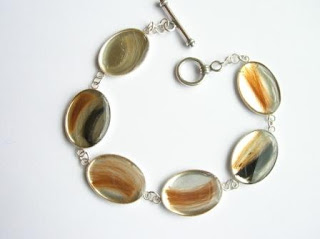 Each of the six silver bezels within the bracelet holds a small sample of the dog’s fur which has been sealed with resin. The bracelet was further personalised with each dog’s name engraved onto the back of each charm. 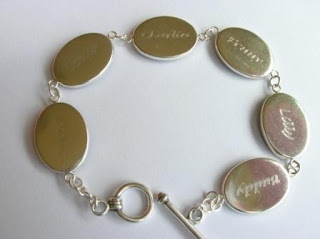 She was extremely pleased when she received her keepsake bracelet and also informed me that the fit was perfect. This was brilliant news because I had made a very last minute decision to extend the bracelet a little. She also let me know that she runs a puppy and dog training academy and has subsequently offered me some excellent publicity; and has also given me an idea for a new range of jewellery so watch this space!

If you would like to see some more of my recent commissions for pet hair and fur keepsake jewellery please visit my pet hair keepsakes gallery.
Posted by Shpangle at 20:27 4 comments:

How did you celebrate your 21st Birthday?

I came across several bags of 21st birthday confetti last week that was originally purchased for a custom 21st birthday jewellery order I had made a little while ago. Not being one for letting anything go to waste I thought I would make a few items of jewellery from them so made these pendants and keyrings.

I encased the 21st confetti within resin hearts, gave them a twinkle with glitter dust and confetti stars and the result are these lovely pendants and keyrings. Being 21 is all about sparkle and I hope these provide a lot of enjoyment for someone and a keepsake for a very special occasion. 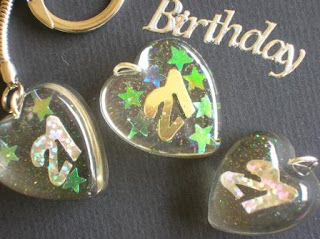 I hired a local club, mobile disco and invited lots of friends and family. My friend made the invitations and I spent a few weeks handing them out to whoever I knew. In fact I probably invited a few too many people; I had visited my regular night-club the weekend before the party and had handed out over 100 invitations to people within the night-club, most of which were complete strangers!

Worried that my invites may have got into the wrong hands I invited my Uncle to be a bouncer on the door. My Uncle was a chief inspector in the police force at the time and I watched in amusement as he interviewed the partygoers as they entered the club. 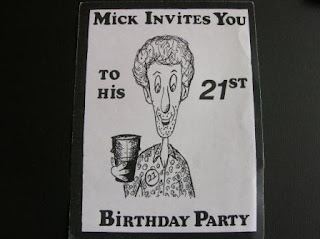 My 21st birthday party was held on the weekend before Christmas so I decided to dress as Santa. Not that it was a fancy dress party or anything, I just thought it would be a good idea to stand out, and stand out I certainly did! Mothers from a nearby bar brought in their young children to visit me during the night only to be met by a skinny 21 year-old dressed as Santa. Pint in hand, beard hanging off I mumbled incomprehensibly to the children. Several children were whisked away by their Mothers, covering their children’s eyes from what could have very easily spoilt their children’s expectations of what Santa Claus was all about.

The party went well until the end of the evening. Suddenly I was tackled to the ground and many pairs of hands reached out at me through the disco lit hall. One by one all my items of clothing were removed and I was left lying on the now empty hall floor...just my Mum, Dad and police inspector Uncle looking down at me. Yes my “friends” had given me a 21st birthday treat and took great delight in removing my clothes which were now making their way to the far edges of town.

We made our way outside in the vague hope that a few of my clothes may have been left behind. There I stood wearing nothing but my Mum’s coat when to top the evening, yes the police arrived. Luckily for me I had my chief inspector uncle at hand and he waved them on; thank you Uncle!

I hope you enjoyed reading about my 21st birthday memories and I would love to hear how you celebrated your 21st Birthday!