Sweetie Jewellery - Handmade crafts that look like food and sweets

This week’s blog post is a result of a forum debate that I had with another maker of handmade jewellery regarding the implications of making handmade crafts including jewellery, soap, candles etc that resemble sweets and food. My concerns were that the jewellery in question resembled sweets and there were possible safety issues and that the maker should consider having it tested. My comment was based upon past experience however was made to seem unimportant by the other jewellery maker.

When I started out making resin jewellery a couple of years ago, my first attempts were to incorporate real sweets within resin jewellery. At the time I liked the fun and often colourful results of using sweets and food within the jewellery and to be honest they were very popular. After making a few items of jewellery my immediate concern was for any health and safety implications of having items of jewellery that looked like sweets. I therefore contacted my local Trading Standards office who were very helpful and came to visit me on a couple of occasions. Not only did they take some of my jewellery away for laboratory testing they were also very helpful with the business side of things. 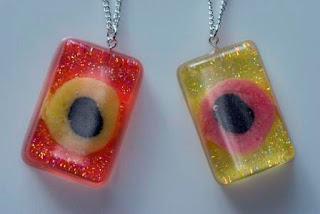 So my jewellery was tested for compliance with the Food Imitations (Safety) Regulations 1989 and they were considered satisfactory. They even presented me with the laboratory report and gave me the ‘green flag’ to allow me to sell them. It was suggested that if the jewellery or beads closely resembled sweets they would not be acceptable; the items need to be sufficiently altered and that there have been several makers of sweetie jewellery and beads that have been asked to stop trading because of this.

"No person shall supply, offer to supply, agree to supply, expose for supply or possess for supply any manufactured goods which are ordinarily intended for private use and are not food but which–

(a) Have a form, odour, colour, appearance, packaging, labelling, volume or size which is likely to cause persons, in particular, children to confuse them with food and in consequence to place them in their mouths or suck them or swallow them; and

(b) Where such action as is mentioned in (a) above is taken in relation to them, may cause death or personal injury."

Seems to be quite clear to me and in my opinion I feel that if anybody wishes to make sweetie jewellery or any handmade crafts that resembles sweets or food they should seek advice before selling it. I have looked at a few reputable online bead shops that sell sweetie beads and several have this statement within their terms and conditions:

"The individual beads must not be resold by you to non-commercial (private) buyers as they do present a potential choking hazard and as such do not comply with section 4 of the Food Imitations (Safety) Regulations 1989.

It is your responsibility that jewellery made with Imitation Food beads is safe and secure. The beads are not edible and they are not suitable for children due to choking hazard." 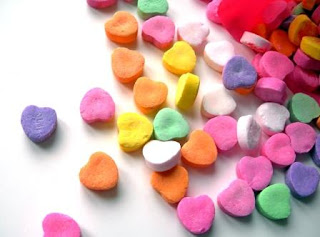 There....got that off my chest!

You may remember a recent blog post when I mentioned my Personalised Horse Hair Jewellery and how I included silver lettering within the pendants to represent the horse’s name or initials. Well, this has proved to be quite popular now with my pet hair and fur keepsake jewellery so I thought I would show a couple of recent examples.

I made this bracelet last week for a lady from Virginia USA who wanted some keepsake jewellery making for her recently departed pet dog. The order was initially for a couple of engraved pendants containing her fur, however the order grew over time and one of the items she wanted making was this lovely rainbow coloured bracelet. 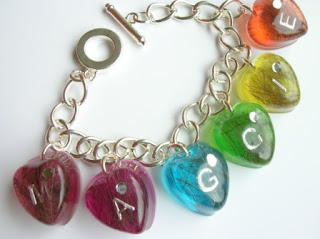 I have included a small amount of her dog’s fur within each of the six charms and included a small rhinestone crystal. The name of her dog ‘Maggie’ has been spelt out using silver lettering and I have coloured each charm to represent the colours of the rainbow.

The second item of pet keepsake jewellery that I want to show you was made for a pony sanctuary in Kent a couple of weeks ago. These were intended as gifts for the people who helped look after the old ponies at the sanctuary. I was asked to make thirteen of these keepsakes and each one was presented on pieces of ribbon within their display boxes. 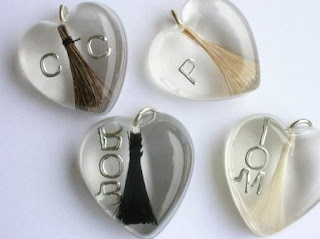 I have included a small tassel of each pony’s hair within the keepsakes along with silver lettering to represent the name or initials for the pony.

If you would like to see more of my horse and pony jewellery please visit my Horse Hair Jewellery gallery.

If you would like to see more keepsake jewellery from other pets including cats, dogs, rabbits and even budgies, please visit my Pet Hair Keepsakes gallery.

Hickory, dickory, dock,
The mouse ran up the clock.
The clock didn’t strike (it had no hands),
So the mouse stayed where it was,
Hickory, dickory, dock...tick tock.
Yes, you may have guessed that my latest necklace is an interpretation of the classic nursery rhyme; however this mouse wants to stay on the clock. 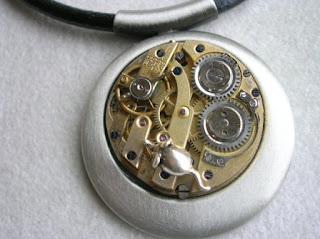 This Steampunk style pendant incorporates an old watch mechanism within a circular pendant bezel that has a burnished finish. The pendant has an integrated tube bail and is hung from a leather thong style necklace chain. The cheeky little mouse took me a long time to source. It is sterling silver and was actually discovered attached to on an old pair of earrings.

I am very proud of this pendant as I have managed to avoid the use of resin that has somewhat dominated my jewellery making! I wanted to keep the old watch parts exposed and natural to make the pendant more tactile. I really do enjoy making Steampunk jewellery; I find it quite therapeutic turning old watch parts into something that can be enjoyed again.

I don’t think I will be selling this pendant but will display her in my ‘studio’ as an inspirational piece..having said that, my wife has already worn the necklace to a family meal so if it goes missing I know where to look!

I managed to get a day off jewellery making last weekend (the first day off since before Christmas!) and we spent the day at Santa Pod raceway in Northamptonshire to watch Drag Racing. Not that I am normally one for fast cars but there is something special about Santa Pod that makes me want to go back for more. It is probably because we get to experience things that are far from the norm; things that you just don’t get to see every day.

The last time we went to Santa Pod was five years ago when my wife was heavily pregnant with our son. We were certainly not prepared for the noise and I spent most of the day shielding my wife from the sound waves that are generated from some of the cars racing down the drag strip...I had never experienced anything like that before, it is far more than just noise and you can feel every organ in your body vibrating through the sheer speed of the cars. Reaching speeds of over 300mph and completing the quarter mile strip in less than six seconds, you certainly can’t blink; I wish I had a picture of my tortured face as the cars and bikes roared by!

This year since my son is five years old we could appreciate the whole experience a little more. Equipped with ear defenders we took in the sights and sounds of Santa Pod. The place has a lovely festival feel about it and there is so much more going on apart from the drag racing.

Titan the robot made a few appearances throughout the day, entertaining the crowds with his wit and humour. 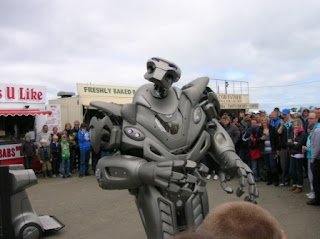 And there were the awesome Monster Trucks, crushing cars like they were paper bags. 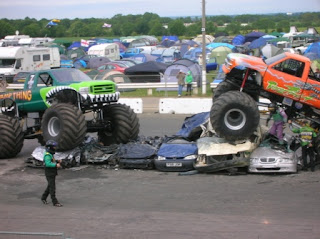 Through the extremely gusty winds the Black Knights parachute display team braved the weather and all made perfect landings next to the crowd. 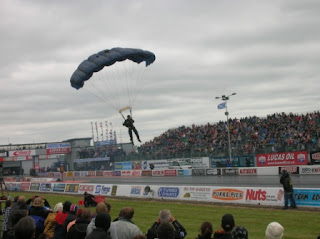 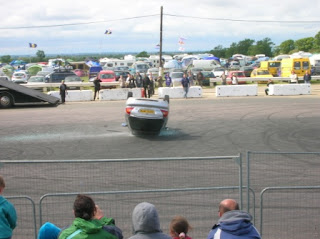 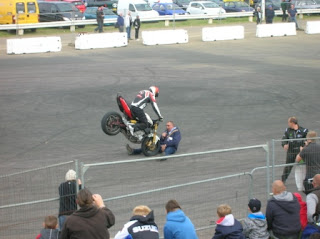 A great day was had by all at Santa Pod raceway and next time I visit I might just have a go myself; they have public days where you can take along your own car to race down the famous drag strip!