As I write this one of my pendants is making its way to the other side of the world, proudly adorned by a soldier.

I was contacted this last week by a young man who had been told he was going off to serve his country. Being away from his family he wanted a pendant that contained both his son and daughters hair. Something that he could wear under his uniform and body armour that allows him to carry something of his family close to his heart. So I made this; a sterling silver pendant, containing the locks of hair from his son and daughter sealed with resin on a leather thong style necklace. 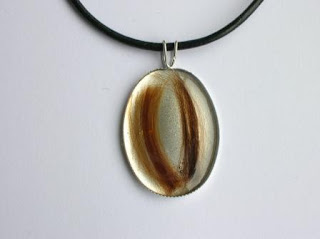 This pendant was so important to him and also because of the short notice that I was given, that he was prepared to travel for several hours to receive it in person. I really liked that; its not often I get to meet the recipient of my jewellery and it was good to see his reaction when he opened the case containing his pendant.

I am not altogether in favour of conflict, being an old hippie at heart, I wish differences in opinion could be settled differently. But I am proud that one of my keepsake pendants is helping a person in that situation.

I wish him well, to stay safe and bring the pendant home along with all of its stories to pass on to his children and his children's children.
Posted by Shpangle at 14:08