I won't write very much in this blog post, but I will leave it to Sharon and her Perkins below. Sharon gave me this message this week after receiving her horse hair pendant that I recently made for her. It brought tears to my eyes and makes me realise how special the keepsake jewellery I make for people is. Enjoy...

"I had my Perkins for over 16 years. I bought him as a scruffy, thin, green little thing just shipped in from Ireland when he was 6 years old. I only meant to keep him a year as I'd lost my confidence off my previous horse! 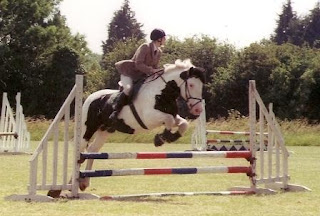 But somehow he grew on me and out-stayed his 12 month contract!!! We had many many happy years of hacking and competing. He was perfect! When he was 13 we found out he had a growth in his foot which had to be removed via a large, very expensive operation. I nearly lost him. I remember the night before the operation; I actually slept in his box with him, terrified of what the morning would bring.

The op was a success and he recovered slowly, but we never competed again and settled into a life of happy hacking. I semi-retired him in 2007 when my son was born and in 2009 he was joined by a yearling New Forest called Echo - my "future pony" for when Perkins fully retired to a well-earned life of leisure. 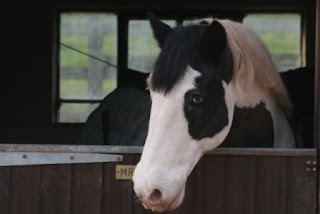 Sadly in June of this year in the field, while haring around with the Echo, Perkins chipped a bone in his leg. Being an old man and already arthritic it soon became apparent that the injury wasn't healing, that the pain killers weren't working and that my beloved old friend was suffering. On the 12th July 2010 I made the heartbreaking decision to have him put to sleep - the last service I could do for a horse that had given me a lifetime of pleasure and loyalty.

The day before he went I took a lock of hair from his tail - I smiled as I did it because his tail was always a wild tangle of course hair, I could never really comb it all the way through and the white streak in the middle of the black was never truly white, no matter how many times I scrubbed at it! I took it home, washed it one last time and put it away in a drawer, determined only to look at it again when I felt ready.

I was keen to have some reminder of him - I had decided not to have him cremated and returned to me as having a wooden box stuck in the house somewhere was not how I wanted to remember my horse. I started googling for horse hair jewellery and found Mick and Shpangle.

The products were so unusual I immediately dug out the hair, emailed Mick and got it in the post as soon as I could. Mick was wonderful, emailed me back immediately, firstly stating his condolences, then letting me know he was going on holiday so not to worry he'd start my pendant as soon as he got back, then letting me know he'd received Perkin's precious hair and was starting work that day. 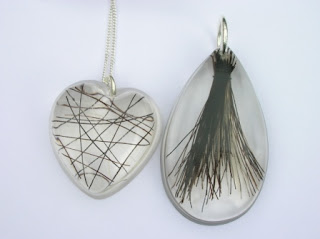 The pendant arrived this morning - along with a lovely surprise gift from Mick of a keyring, both with Perkins' hair preserved forever. I've worn the pendant all day today and lots of people have asked me about it.

It makes me sad when I explain the story of the pendant, but happy too that I can keep talking about my horse as people admire Mick's handiwork so Perkins' will always be close to my heart on a silver chain, and his name never far from my lips!"
Posted by Shpangle at 09:26