How to Make Personalised Photo Jewellery

I was recently given the opportunity to make some resin photograph pendants and keyrings for the very talented Laura and Gord of Cards & Candles for All Occasions.

The resin pendant and keyrings were to be made double sided and each would contain some very special family photographs. The photographs were emailed to me (which helped as I could then photo-edit them to fit into suitable pendant designs). The following describes the tasks I carried out to convert their very special photos into items of jewellery.

The pendant is then left several days to cure, removed from the mould, sanded, drilled and jewellery findings attached. And this is the result, beautiful and personalised photo jewellery, handmade by me! 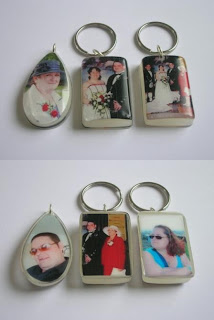