I remember as a child and even now that my favourite birthday and Christmas presents have always been those that have been handmade. The fact that whoever gave me the present had taken the time to design and make something just for me means more than any shop bought item. My favourite present when I was little was a sledge that my dad made for me. It was extremely heavy and so well made that it lasted years, and I think at some point we even turned it into a go-cart.

It was our daughters 12th birthday this week and being a girly-girl I thought I would make her some jewellery. It is quite handy being a jewellery maker at times like this and decided to make her one of my name necklaces. I have had a really big name on rice jewellery order to complete this week so because I was in the zone of writing on rice I thought it was probably the most sensible thing to make. It is also something that would be very personal to her; her name written on a grain of rice, and I also included her birth stone as well within the glass vial. A very small Rose coloured Swarovski crystal to represent the month of October. 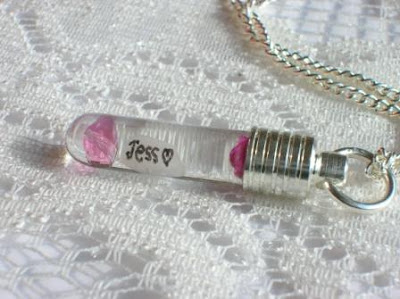 I personalised the jewellery box that contained the rice pendant with her name in gold lettering and I think she loved that alone, but when she opened the box saying she was happy would be a understatement; I immediately go a really big hug from her. I think the face that I had made something for her and had taken the time to write her name on a grain of rice meant more than anything.
Posted by Shpangle at 14:34