Name on Rice Jewellery - For a Crafts Forum Friend

I made this name on rice necklace last week for a friend on the Crafts Forum and a similar one as a keyring for her hubby. They have both got lots of things happening over the coming months and wanted the good luck that name on rice jewellery is said to bring it's recipients! 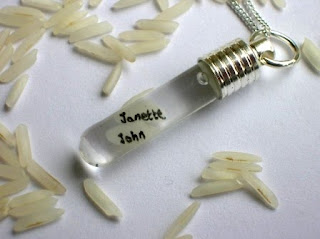 This was quite different to the rice writing that I have previously done in that she wanted two names (initially on the front and back of a single grain of rice). I spent a couple of days trying to do just that but every time I came to writing the second name, I failed. I am extremely meticulous with my work but I think it was the psychological barrier of knowing that I was writing on the back of something that I had spent so long getting right.

Anyway, as a compromise I suggested having two grains of rice, with their names in the same necklace vial, and I must admit it seems a lot better and more symbolic of them both.

Have a look at my website page for more examples of name on rice jewellery and its history.
Posted by Shpangle at 20:10